It’s sad truth but most men don’t know how to flirt with women. Most times, it is deemed as a dubious attempt at getting sexual affection from the opposite sex; as a manipulative attempt to cajole people in becoming sexual partners. What many don’t know is that flirting, for men, is an important social process that establishes confidence and distributes self-esteem.

Flirting is arguably one of the primal calls of nature. As animals, human beings have the urge to procreate. Driven by these urges, we often find ways to find sexual partners using whatever psychological means lay at our disposal. In the past decade, men had wingmen whose jobs were to help attract desirable partners. Today, that wingman comes in the form of online dating apps like Tinder and whatnot.

These software companies act as third parties who match prospective partners based on an algorithm. Problem solved? Not really, far from it actually. The advent of these dating apps has decreased vital social interaction. Not often do you see man and woman exchange social cues such as elaborate facial expressions and subtle body language that scream ‘I like you’

It’s all automated these days. And it stinks in our opinion.

Too many men feel nervous about making a move these days. They’d rather jump on the social media matchups the internet provides than encounter real-life partners on the sidewalk or coffee shops. If you desire happier organic relationships, then flirting should be your go-to. If done in the best way possible, flirting can be a powerful weapon in the hands of men. You’ll never need a sating app ever again.

So if you need to learn or a reminder on how to flirt with women, here are some tips to help you flirt out in the real world:

We didn’t write this article just for you to waste your flirting skills online. The dating world is pretty static; there are limits to the context of a conversation. A one-way chat with a prospective partner online almost always comes off as bleak and uninspiring. Why not take her out to coffee or some creative and unique experience? Seeing each other face to face allows you to interact better. It’ the only way to sense physical chemistry.

How do you get to the face-to-face part? Well, here’s what you should do. First, find someone you’re really interested in. You don’t have to use rigid dating apps. Social platforms like Instagram and Twitter make it easy to meet new people. This doesn’t mean you should like all 200 pictures of them—that comes off as creepy and a little threatening. Ease off on the likes.

Interact with the said person via DM. Pay attention to the feedback; it says a lot about the other person’s level of interest. If your DM receives no response, take your L and move on. There is nothing you can say over the internet that can convince someone to take an interest in you. Online flirting works both ways; a rare occurrence; this is why you need to take it offline.

Great, you finally got them off the internet and out on a date. That’s a step but you still need to initiate the flirtation process. But hold on, that’s a lot of compliments to be given to a person you just met. Take it easy. The best types of compliments are subtle and unforced. Speak from the heart and not the pants.

Keep your hormones in check and let the conversation flow. The time for compliments will eventually come; you just need to be patient. When the opportunity does appear, keep it simple. If you tell a joke and she laughs, say something like, “I love the way you laugh.” See, that compliment really puts her personality in perspective; and that’s how you flirt. 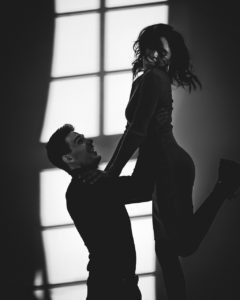 Touch When You Get The Green Light

You don’t want to come off as a creep or worse, a pervert. Touching enhances flirting but only when enabled by reciprocation. Physical contact between two persons is a conversation beyond words. As a man, you shouldn’t repeatedly touch a woman without approval. That often comes out as offensive. Start with a gentle touch on her arm or shoulder.

If she reciprocates, that’s your green light. You can then move closer or hold the touch for a longer time. Sometimes, it may not be that easy. If done right, touch can accelerate connection and trust.

Trust us; you don’t want to be one of the many guys who look at her bust. Try to keep eye contact. Keep it confident and non-aggressive or intimidating. Whilst talking to a woman, glance at her eyes and lips alternatively and smile when she takes notice. Moisten your lips while you do this, and watch how her body reacts. This is by far one of the best ways on how to flirt with women. It conveys passion, confidence, playfulness, and sensuality.

Most guys think they’ll scare off the girl if they appear whimsical. But the truth is if you don’t make jokes, you’ll appear boring. Humor helps even the most “unattractive” man get an “attractive” girl. For your flirtation to look as natural as possible, you need to crack jokes that fit in the conversation. This gets her to listen because she suddenly becomes interested in what you say and not how you look. Ditch the cliché flirtatious pick lines and make your conversation with her fun and genuine. 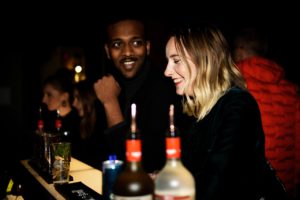 Show That Stunning Smile Of Yours

Nothing warms the heart like a genuine honest smile. Happiness is something women associate with. Trust us when we say, they can’t resist your smile, especially when it’s directed at them. But pay attention to the times you smile. You don’t want to grin ear to ear when she tells you how her pet lost a limb or something. That’ll be pretty creepy.

As the conversation prolongs, you need to spice things up with some playfulness. A tease is a perfect way to show the lady the sort of person you are, fun and entertaining. Start with a silly joke about what they ordered or the story they just shared. But keep in mind; teasing can become offensive if you don’t think it through. If you don’t know the person that well, it’s best to keep smiling.

Be Honest About Your Feelings

Sometimes, the best way to get the girl is to go straight to the point. You don’t have enough time in the world to wonder if she likes you or not. If you really like someone, let them know. Since you’re still in flirt mode, express how you feel in a light-hearted manner.

Now, get off the internet, go out into the world and meet beautiful women, you heartbreaker you! Conversations with women are at their best when you talk face-to-face. Remember to smile and be you.

Feel free to share your own tips on how to flirt with women in the comments section below.

Check out our previous article here!